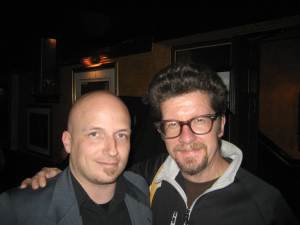 Sometimes we are reminded of our past through the voice of a musician when their music served as the soundtrack to our lives. It is as universal as mathematics – the ability to be transported back to a time and place with relative ease through music. Similar to how certain fragrances take me back to my childhood, like how musty scents in houses remind me of my grandparents’ cottage, the feeling of abundant nostalgia is like nothing else I know.

Last night I met the singer whose voice was the sole representative of my life for a solid year. The year was 1994.

My father let me venture to Bella Coola, British Columbia, so I could work with my uncle who did government environmental work. I was 18, a shit disturber and reeling over what now seems like a meaningless broken heart. But I guess every broken heart has its meaning, hindsight be damned.

As a hip hop head I was easily able to keep my inner feelings under strict control, preferring a head nod over nostalgia music as a way of keeping my cards close to my chest. But, along with my change of scenery came a change in the soundtrack, so instead of packing Gangstarr and KRS I opted for Counting Crows and Skydiggers. Funny, I almost just lied about the Counting Crows, but whatever, August and Everything After is a great album. And Just Over This Mountain, the Skydiggers album, was an organic, emotional experience and spoke to my change in scenery.

I went to Bella Coola, connected with my father’s brother, worked deep in the Rockies and traveled the BC coast. Andy Maize, the lead singer of Skydiggers, provided a sort of melodic commentary as the cassette replayed over and over throughout my trip and then for months when I returned home. He was there when I reflected on the prospect of never succeeding. He was there when my butterflies waved their wings over some girl who showed an interest. He sang lyrics that matched my mood seamlessly, and ever since, whenever I hear some of those songs, I am instantly transported back into the mindset of that 18 year old kid. Interestingly, I never really got sick of the album, I just put it to rest when that chapter of life was complete and then went back to the hip hop crate.

Thinking about life in my 30s, I am convinced the era of having soundtracks for life chapters are gone. Everything is so accessible that it can be best expressed through ‘Random Play’. Ever since I began this crazy journey of running for mayor I’ve noticed I am listening to everything from Nina Simone to Johnny Cash, Jazzmatazz to Hibernate. There isn’t just one voice serving as the backdrop and I don’t think there ever will be again, not until I am an old man perhaps.

So last night, after attending a beer tasting with a friend, I headed over to another friend’s bar (The Duke of York) and shot the shit with a few regulars. This guy with dark rimmed glasses steps to the bar and waits to be served, and I blurt out “Hey, are you a musician?” He says ‘yes’. He didn’t look familiar, he just looked like a musician. The girl on his arm then says “This is Andy, lead singer of the Skydiggers.”

I could opt for using a word like ‘trippy’ or ‘weird’ or some other adjective denoting a glitch in the pattern of my day to day, but I really haven’t found the appropriate word to describe meeting the dude whose voice was so poignant to me for so long. So I just told him the truth – that his album, while likely ancient history for him, paints a vivid picture of a time in my life when things were confusing, different and hopeful. I shook his hand and thanked him, adding “It isn’t every day you get to meet the guy responsible for the soundtrack, if you know what I mean.”

He and I talked for about 45 minutes. He bought me a pint and I returned the favour. I guess the best part of this particular story, and it is hardly surprising, is that he was just a regular guy. I went out for a smoke and ended up getting a light from Steven Page of the Barenaked Ladies, and it all made perfect sense to me.

Page confided to me that Andy was his muse when it came to stage presence. So I told Page that his cover of Bruce Cockburn’s ‘Lovers in a Dangerous Time’ still hit the sweet spot of my soul.The three of us chilled for a little while, they gave me props for running for mayor and I left, preferring to be the guy who said goodbye rather than trying to unnaturally stretch out the evening.

I walked to the subway with ‘I Will Give You Everything’ playing in my head for the first time in years. When I finally got home I even took 4 minutes to watch the video for Lovers in a Dangerous Time. Two bands in the same vein as far as Canadian music goes, but who hold completely different meanings for me, all in one evening that went from a typical night of drinking to complete and utter reflection of where I’ve been and where I’m headed.

I just realized that there is still room for the chapters in our lives to have a soundtrack, but it might be the same voice we have heard in our heads all these many years.

Error: Twitter did not respond. Please wait a few minutes and refresh this page.